The following post is reprinted with Richard Beck’s permission from his blog, Experimental Theology.  If you haven’t visited his blog, you’ve missed something.  Richard writes about things that matter.  And just as he always challenges me to think about something in a different way, he always points me back to following the Way of Jesus.

This piece is no different.  Thanks, Richard.

The Fence of Matthew Shepard

That’s what the killers said to Matthew Shepard before brutally beating and torturing him.    Eighteen hours after the prolonged beating a cyclist found Matthew, alive but unconscious, hanging on a fence (pictured right).  The cyclist initially mistook Matthew for a scarecrow.   Matthew was taken to Poudre Valley Hospital in Fort Collins, Colorado. [H]e was in a coma. The autopsy later revealed that Matthew had been struck in the head 18 times with a pistol causing severe brain-stem damage. Matthew never regained consciousness. He died at 12:53 a.m. on October 12, 1998. He was twenty-two years old.   The Westboro Baptist Church attended Matthew’s funeral.   They held up signs.

“No Tears for Queers”

Many of us recall the news coverage of Matthew Shepard’s death. The outcry was enormous, eventually leading to advocacy groups requesting that attacks made on the basis of sexual orientation be added to the federal definition of a hate crime. After numerous setbacks and a great deal of political posturing the legislation was finally passed in 2009 by the US Senate and House. President Obama signed the bill into law on October 28, 2009, eleven years after Matthew’s death.

People wonder from time to time why I write about the relationship between the gay community and the Christian church. It’s not a comfortable topic where I live and work. But the answer is pretty simple.

I’m haunted by the scarecrow hanging on the fence.

Unfortunately, during the course of 2,000 years of Christian history, this symbol of salvation has been detached from any reference to the ongoing suffering and oppression of human beings…The cross has been transformed into harmless, non-offensive ornament that Christians wear around their neck.

Cone argues that during the Civil Rights struggle the Christian symbol of salvation should have been, though it was not, connected with the lynching tree–an actual and ongoing location of human oppression and cruelty. For when the two become separated–when the cross hung around our neck or in our church fails to bring to mind current and ongoing locations of cruelty in our world–then the Christian faith has lost its way.

The cross, to be a truly Christian symbol, must bring to mind the lynching trees of the world.

Christ hangs from the cross as Blacks hung from trees. As Matthew Shepard hung from a fence.

Until we see Jesus standing with the cursed we will never understand the central symbol of our faith nor what it means to be a Christian.

Saul falls on his face on the road to Damascus. He looks into the blinding light and asks, “Who are you Lord?” And the reply comes: “I am the one you are persecuting.”

Jesus hangs on the crosses of the world, from the trees and from the fences. It is as Elie Wiesel describes in his memoir Night. After watching a young boy hanged by the Nazis in the concentration camp:

Behind me, I heard a man asking:

And I heard a voice within me answer him:

“Where is He? He is–He is hanging here on this gallows…”

And yet. And yet. I am haunted by the fence of Matthew Shepard.

As I reflect on my Christian walk I often ponder this question: If I had lived in Nazi Germany would I have stood up for the Jews?

Most Christians didn’t. And as I psychologist I’m familiar with studies like the Sanford Prison study and the Milgram Obedience study. I’m aware that normal, god-fearing people can do horrible things when pressure is put upon them. 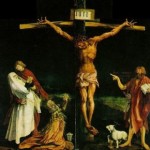 So what makes me so special? Statistically speaking, odds are I would have made a good Nazi.

I also think a lot about the Civil Rights Movement in the US. I ask myself: If I had lived in the South would I have marched with Martin Luther King, Jr.? As Cone asks, would the cross in my church have made me think of the lynching trees in my nation? Would I have seen the connection?

And I keep wondering. Am I any different? What makes me think I’d be a courageous agent of light in those circumstances? Odds are I’d be just like everyone else.

And then I think about the fence of Matthew Shepard.

Let me tell you what keeps me up at night. My deepest fear in life is that I’m going to end up on the wrong side of God’s history. Like so many Christians before me. My fear is that a moment will come when I am asked to stand up for those hanging on the trees, literally and symbolically, and I’ll respond with “That has nothing to do with me. That has nothing to do with the church.”

Where are the cursed scarecrows of this world? And does the sight of the cross bring them to mind?

I’ve read a lot of books and written a lot of words about Christian theology. But really, it’s all pretty simple.

Jesus hangs from crosses, from trees and fences.

And to see that, like Saul on the Road to Damascus, is the day of your conversion.

The day you become a Christian.