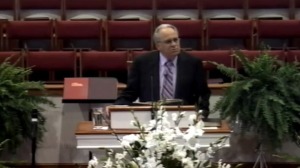 And I probably wouldn’t have the opportunity to even know who he is, except that a sermon he preached recently against same-sex marriage was posted on YouTube.  Pastor Worley said some violently hateful things – things that aren’t worth repeating.

The remarks were so hateful that this past Sunday 1,000 people showed up to peacefully protest outside his church.

Last week lots of people sent the sermon link to me personally.  Even more posted it on Facebook.  On Twitter.  Over and over and over.

Part of me knows that this must happen in order for followers of Christ to be made aware of what’s being said so hatefully in the name of Christianity.  We need to know in order to understand why there’s such a backlash against Christianity sometimes, particularly in regard to homosexuality.

We need to know so we can correct it.

Another part of me cringes when I see things like this being promoted because of the negative picture it paints of all Christians.  Of all things done in the name of Christ.

But I’ve always agreed with Thomas Jefferson on this one – the way we contend with speech we don’t agree with is not by stifling it.  It’s by speaking out more.

All kinds of feelings rise to the surface when I hear things such as Pastor Worley said.  Anger.  Frustration.  Rage.  Hatred.  Sadness.  Embarrassment.  Humiliation.

Just when I think perhaps we’ve gotten past saying things that are so demeaning and hurtful, there they come again.

Just when I think we’ve come to understand the damage that has been done in the name of Christ by remarks like these, there they come again.

Here’s the thing – I know lots of folks who are in ministry.  I consider quite a few pulpit ministers my friends – friends I love dearly.  Friends who have helped shape my life and my picture of God – a loving God who cares deeply for me.

I’ve listened to lots of sermons from lots of preachers.  In churches all over the country.

But I’ve never heard anything even remotely similar to this come out of their mouths.

Why is it that this video is what we hear to represent Christianity?

When there are plenty of voices who would never dream of saying something like this.

Why aren’t clips from those sermons posted?

Messages of Love and “radical inclusion.”

When this is what’s publicized, and there’s no alternative, why wouldn’t people believe this is the view of all Christians?

Is it any wonder that a younger generation chose “antihomosexual” as its number one descriptor of Christians?[i]

involved in the lives of

people we work with,

people who live in our neighborhoods,

people in our families,

people who share communion with us on Sundays whom we still don’t know,

that our lives of compassion and service –

of being the very essence of Jesus –

became the prevailing view of Christianity.[ii]

Not just one day a week, but seven.

From Kinnaman, David, and Gabe Lyons. Unchristian: What a new generation really thinks about Christianity…and why it matters.  Grand Rapids, MI:  Baker Books, 2007, 92 – 93.  Unchristian presented the results of a survey conducted by the Barna Group which questioned ‘outsiders’ (those who consider themselves atheists or unchurched; not born-again Christians) ages 16 – 29 about their perceptions of Christianity.

“Our actions, responses, and relationships must consistently be filled with compassion, honor, and love. We must stop identifying people as “sexual beings”and instead identify them as “human beings.” The change comes by sitting with our gay friends and family members at their dinner tables and in their living rooms. We go to their events and serve. We seek to do life together and find understanding. It is time for us to humbly serve and honor those we have been so effective at hurting in the past.

“But we must keep this one thing in mind: it is critically important that we do            this not because we feel compelled to “set the record straight” on Christianity, but because it is the way of Christianity.”