Two CenterPeace events and another thousand miles on my car later, and I’m finally back to finishing our review of Wesley Hill’s Washed and Waiting!  I hope you’ve enjoyed learning from Wesley’s experience and perspective as much as I have. Whatever your views regarding faith and homosexuality, this book enlightens us to the truth that we must approach the subject – and more importantly, anyone who experiences same-sex attraction – with greater compassion.

In the last section of Washed and Waiting, Hill takes on the most important issue of the book.

Perhaps the most important because it is shame that weighs us down.  Cripples us. Prevents us from experiencing the joy God meant for us in this life, even in the presence of great struggle. 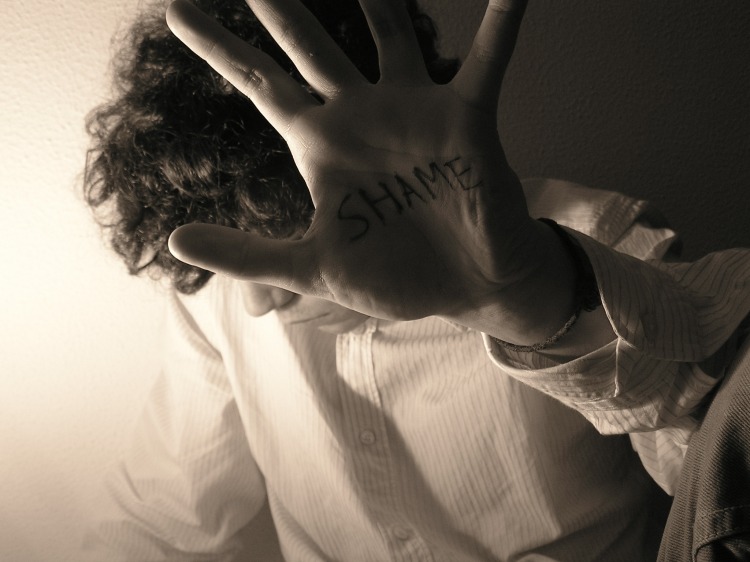 Shame is not the “godly sorrow that leads us to repentence.”  Shame is different from guilt that convicts our hearts.  Shame is that gnawing, unable to lift your head self-loathing that leads some to live in fear and hiding.  Some to live in total rebellion and believe it’s freedom.  And shame leads others to an early grave, because the burden was too great to bear alone.

I’ve felt that shame.  It’s the feeling that makes you consider running your car off the side of the road rather than having to tell someone that you’re experiencing feelings you don’t understand.  Feelings that you didn’t ask for.

I remember all too well the looming dread that came over me when I first imagined telling anyone that I was attracted to women.  How my heart would race and my whole body would tremble with fear at the thought of someone finding out.  I wanted to carry that secret to my grave.  When I first began to discover those feelings in myself, I didn’t even know what to say.  I didn’t know how to describe or talk about what I was feeling because I’d never heard anyone say anything kind in regard to homosexuality.  All I knew was that it was a sin.  The vilest sin anyone could commit.  Or at least that’s what I believed, because the only things I’d heard growing up were hateful condemnation or making fun at someone else’s expense.  I can still see the looks on people’s faces if the subject was ever brought up, shaking their heads in complete disgust.

When all you’ve ever heard about something is how horrible it is, and then you come to realize that ‘horrible thing’ could be said about you, it’s humiliating.

That’s the kind of shame that Hill’s talking about.  The kind of shame that anyone I’ve ever talked to who experiences same-sex attraction has felt.  Whether we view same-sex attraction as a struggle, as Hill does, or we’ve embraced a gay identity, at some point in all of our lives, we know shame.  And when left unaddressed, it can drive us to extremes – some to despair and suicide, others to fight against anything that remotely resembles what they believe to be the source of that pain, Christianity.

Sadly, as Hill addresses in this last section of the book, that’s not at all what God intended his sons and daughters to experience as followers of Jesus.  As Hill explains, a different perspective on how God sees us is needed to lift this unnecessary burden of shame felt by so many who experience same-sex attraction.

That’s what it took to lift the burden of shame I carried.

I also remember the day I realized that God’s love for me had never changed – no matter what circumstance I was in – no matter what my mindset or my behavior – that he had loved me the same all the time.  In the midst of darkest moments of anger and rage, selfishness and pride, and in the midst of sexual sin, he loved me the same as he did when I was in the midst of worship, singing praises to him, visibly moved by the stories of his life, or in a moment of kindness to a stranger.  He loved me no differently.  No more.  No less.

His love is constant, unchanging, no matter how I act.

Not like my love for people. Love that changes depending on whether the person behaves as I want them to.

When I finally got that about God’s love for me – when I realized that he sees me differently than I see myself – that he sees me only through the filter of the Cross – but more than that, God sees me simply as the daughter whom he created and delights in me just as I am – well, that’s when things began to change.  That’s when He truly became ‘the lifter of my head.’

That’s the truth that Washed and Waiting leaves us with.

Through the lives of Henri Nouwen, a 20th century Catholic priest, and Gerard Manley Hopkins, a 19th century British poet, Hill illustrates the struggle to live a celibate life as a gay Christian.  The overwhelming feeling of shame attached to homosexuality in the time periods in which they lived made their journeys even more difficult.  And yet still today, in many cultures, for many of us who have grown up in church, the sense of shame surrounding homosexuality remains paramount.

Hill understands that shame, but encourages us to go beyond old ways of thinking.

“More and more, I have the sense that what many of us need is a new conception of our perseverance in faith.  We need to reimagine ourselves and our struggles.  The temptation for me is to look at my bent and broken sexuality and conclude that, with it, I will never be able to please God, to walk in a manner worthy of his calling, to hear his praise.  But what if I had a conception of God-glorifying faith, holiness, and righteousness that included within it a profound element of struggle and stumbling?  What if I were to view my homosexual orientation, temptations, and occasional failures not as damning disqualifications for living a Christian life but rather as a part and parcel of what it means to live by faith in a world that is fallen and scarred by sin and death?”

I talk to so many men and women who have lived their whole lives in shame because they experience same-sex attraction.  Because some people have believed that it was impossible for a good Christian to ever have those feelings.  And so we’ve talked about homosexuality as though it was the worst possible thing that could ever happen.

Continuing to talk about homosexuality in ways that perpetuate feelings of shame isn’t helpful.

Because the truth is that homosexuality ‘happens’ in good Christian homes, to people who sincerely love the Lord, who truly desire to live lives that are pleasing to God.

We need brothers and sisters surrounding us, reminding us that our struggles have the potential to draw us into deeper relationship with God and greater understanding of ourselves.

And as Wesley’s closing words encourage us,

“. . .  to trust in the mystery of God’s providence and his gift of redemption through Christ.  With patience and openness to the good that may come even from evil, we can learn to ‘hear’ the voice of our sexuality, to listen to its call.  We can learn ‘to appreciate the value of our story and the stories of others, because God is the ‘potter’ or ‘storyteller.’”