Thank you to my friend, Keith Brenton, for the wonderful idea of “Fridays with Family” as a way of allowing family members to share their experiences with LGBTQ siblings, grandchildren, nieces, nephews, aunts, uncles, and cousins as well. Thanks, Keith for going first!

This post may be a little interruption in the flow of the “Fridays with Fathers” series, but I asked blog host Sally Gary if I could share a perspective from outside the view of parents and immediate family, and she encouraged me to try.

My brother-in-law David was adopted, my late wife’s only sibling, and one of those introverted people with a quick smile that you immediately liked. I remember when Angi told me of him when we were dating in 1990, and after describing other members of her family and him, she hesitantly added, “… and he’s gay.”

I think I shrugged and said, “Okay,” with a smile. “I’m looking forward to meeting him.” I’d had friends and co-workers since high school who were gay – a couple of whom I was pretty sure about even before they were. I thought, “I have friends who are. I’ve watched ‘Brothers’ on TV. I can deal with this. I can tolerate this. I can accept him.”

I knew this would be different, having a gay brother-in-law, but it certainly wasn’t going to be so different that I wouldn’t ask Angi to marry me. Even if the look on her face at my reply was a little bit doubtful.

David worked as a DJ in clubs, mostly in Dallas, but occasionally in Little Rock where we lived, so we saw him from time to time – and always at the holidays. I loved how his mom, cousins, aunt and uncle would take David and us all in like prodigals when we’d drive from hours away for Thanksgiving and Christmas in Iowa Park, Texas. It was a little bit of a surprise that he would be so loved by a family in which his uncle was an elder and his late father had been a fairly well-known minister in very conservative churches of Christ. But I knew from that I had struck a gold mine in the in-laws category as surely as I had struck gold in winning Angi as my bride.

When we adopted our first child, a little boy, I think David was nearly as excited as we were at the prospect of having a nephew.

He was a terrific uncle to Matthew, and even as a baby, Matthew bonded with him as much as he did with us and with Angi’s mom.

Then we received bad news. David had been diagnosed with lung cancer, and while the blood work was being done, the HIV virus was also discovered. In the early 1990s, treatments were few and rumors were rampant. AIDS was virtually a death penalty, and patients were avoided like lepers. Fortunately, in those pre-Internet days, we had conversations with doctors and knew better than that about the communicability of the disease.

A strong and handsome fellow, David began to truly suffer from the symptoms of the disease. Sometimes there weren’t any words to say. Sometimes all we could do was watch him play with toddler Matthew on the floor, and hug him when it was time to say goodbye.

That Christmas, David lavished several wonderful toys on his nephew, the biggest of which was a polyethylene red wagon that became Matthew’s favorite for years after; in fact, I still had it until last year, and a friend at church needed one to help with gardening.

We always celebrated at my mom-in-law’s house in Iowa Park, and then at his uncle’s nearby ranch. One of our traditions was to drive into nearby Wichita Falls to see the Christmas lights and fairy-tale displays on the campus of Midwestern State University there. I can still picture Matthew, wide-eyed, riding his Uncle David’s shoulders and clinging to his neck, where a couple of painful-looking lesions had started to grow – but Uncle David never said a word.

When it was time to go, Matthew hugged David for all he was worth, and I did too. I was afraid it would be the last time I would see him. And it was.

Angi got the call a few weeks later that David had been hospitalized and the end was near. She packed quickly and went to spend the last days with him and her mom there; I stayed home with Matthew.

The cancer, advanced pneumonia and AIDS were too much together to fight.

We buried him near his dad in the family plot on top of a hill in Iowa Park on a cold, blustery day. I tried and stumbled through a few words from scripture the family had requested.

I would never have wanted him to suffer longer, but I felt cheated; cheated for only getting to know him those few years; cheated on behalf of Matthew and Angi and her family and any other children we might be blessed to adopt in the years to come.

Angi had a photo of David and Matthew at Christmas, and she had an enlargement made and framed, and it was always on a wall near our children’s rooms wherever we moved: Springfield, Missouri; Abilene, Texas; and back to Little Rock.

One time when our second child, Laura, was still very little, she pointed to the picture and asked me, “Who dat wif Matt-you?” 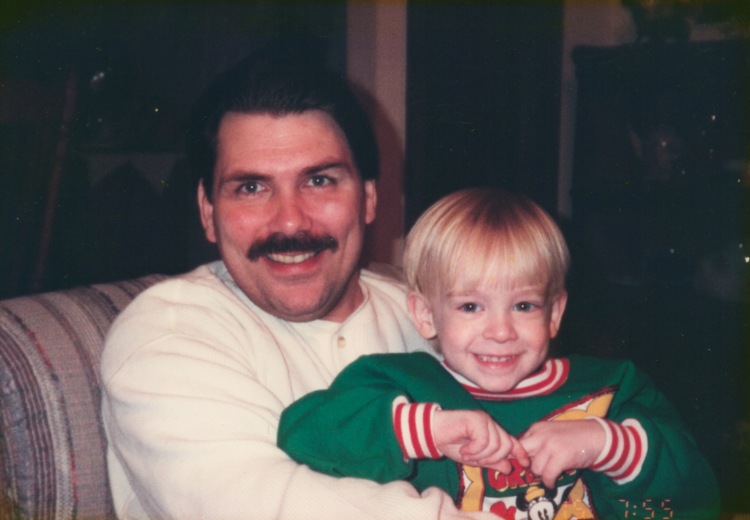 “That is your Uncle David,” I told her. “I’m sorry you didn’t get a chance to meet him.

It would be many years later that I would hear of Sally Gary – and that would still be at the very founding days of CenterPeace – but she had written an article of her own life experiences and her inspired dream to serve in this ministry for a publication that I was helping to place online.

I could see from her words there that what would be taught by the people dedicated to that ministry was the same thing I had already learned from Angi and David’s family: not tolerance, not even just acceptance, but genuine love from family is what is needed most.

They’re the best, too.