Some amazing things happened over this past weekend.

For the first time in my life I baptized someone in front of the entire congregation on a Sunday morning. I’d been privileged to baptize someone on two other occasions, but it was at another time, with just a small group of people gathered, so this was a different experience.

This baptism was also different because I’ve known the person longer and spent more quality time with her over the past few months, while she’s been our summer intern for CenterPeace.

I first met Jordyn when she was 14 years old. Jordyn had recently come out to her parents as gay, and while they didn’t turn her away, they were deeply troubled by the revelation of her sexuality. Her mom wrote the pastor at their church, confiding in him and asking for resources to help them better understand. Their pastor was acquainted with CenterPeace and immediately contacted me. Within the year we managed to organize a trip to Jordyn’s home church to conduct one of our weekend Peacemaker workshops. A Peacemaker workshop includes spending time with church leaders, and with the entire congregation, so that everyone would learn better ways of understanding and relating to Jordyn.

While I was there, Jordyn’s parents asked if I could spend some time with Jordyn one on one. Since Jordyn was only 14 and not much of a coffee drinker yet, I opted to meet with her in a frozen yogurt shop. Over bowls of salted caramel frozen yogurt and chocolate syrup, Jordyn asked me one of the hardest questions I’d ever been asked.

“So does this mean I have to spend the rest of my life by myself?”

It was the way she said it that got me. Not one ounce of hostility or cynicism, as you might expect from an adolescent. Her question was sincere, heartfelt, respectful of a traditional Christian view of sexuality that requires those of us who are gay to remain celibate for life.

A million thoughts raced through my head, primarily the fact that when you’re 14, the rest of your life seems like an eternity, but also the rush of hormones we experience during puberty compounds everything. I was also mulling over the expectation so many fellow believers would have – that I would answer her question with a resounding “yes.”

I could have told her she’d have community to sustain her, to be there with her through all of life’s struggles, like some churches I know. But that’s not always true. Churches still exist who wouldn’t welcome anyone who is gay, no matter what sexual ethic they upheld. Other churches might let you come in but forget about being involved in any aspect of the work of the church, especially if you want to help with children or the youth group. The fact is, there are still so many Christians who buy into the myths about LGBTQ+ people, that even when most of a congregation is at least better informed or fully affirming, it’s still risky to the unity of a church to permit LGBTQ+ people to serve in some places. And honestly, even in the most hospitable churches, like mine in Dallas, it doesn’t begin to fill the needs for connection, companionship, and intimacy like a relationship with one other person to share life with does.

So what do I tell her?

Do I encourage her to go ahead and rely upon a church whose idea of providing community is one to three assemblies each week, with an occasional potluck and monthly small group meetings in homes? What happens during the other parts of the week?

Do I encourage her to seek out like-minded, single, celibate friends who may be willing to commit, at least for a season of life, to a communal living arrangement? What happens when that season of life ends? Or what if you’re in an area with limited options for housemates?

Do I tell her what people have told me when I’ve expressed the difficulties of living alone – that it’s no different from being heterosexual and single – when I know full well that it IS different? It’s different because single straight people always have the opportunity to meet someone, fall in love with that person, and decide to marry. That option’s always available for someone who is heterosexual.

But it’s not an option for us.

You see, we, too, have met someone and fallen in love, but knew we could never marry that person without totally disrupting our world.

Yes, marriage equality is a reality now, but for so many of us, still, in order to fit into our world – a world in which we are told in multiple ways that it’s impossible to simply be gay and Christian, let alone enter into a relationship with someone of the same gender – we can’t even imagine having someone to share our lives with us.

That’s a hard reality to face when you’re just 14 years old and there are very few people, if any, in your church who want to talk about how hard that is to live out.

So the fact that five years later Jordyn still wanted to be baptized, wants to follow Christ, wants to be a part of a faith community, is astonishing. You’ll have to ask Jordyn just exactly how that happened, but I think she might say that having a family who has supported her, and a growing network of LGBTQ+ people modeling life as a Christ-follower before her has helped.

And we as the Body of Christ must begin to sincerely explore how we will provide deeper community – the intimacy God designed each of us to need – for the Jordyns in our midst. 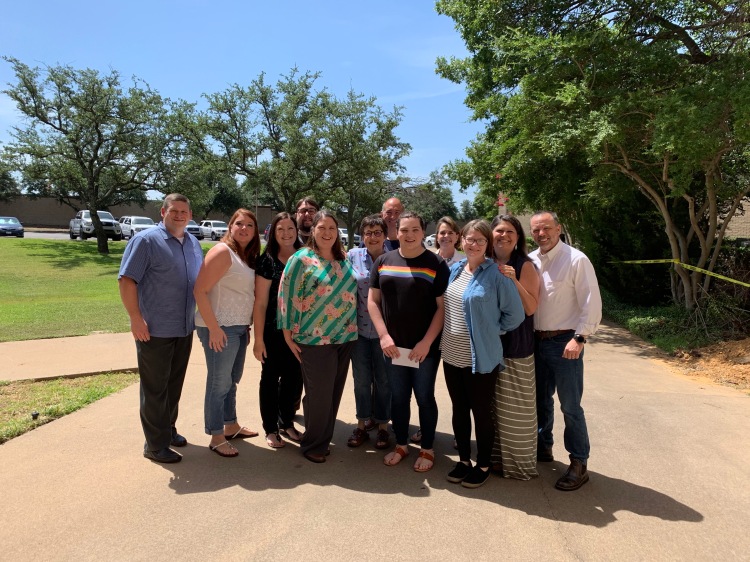 Here are some questions to ponder – let us know what you think.

What would you say to a 14 year old in your congregation who asked Jordyn’s question?

What are you currently doing in your church to provide deeply meaningful community for people who live alone in your midst?