They came from all over this past weekend, to a spiritual formation retreat for LGBTQ+ college students. Some identify as lesbian, some as gay, bisexual, trans. Some are still questioning, which is totally understandable as a college freshman, only 18 years old. They came from Christian universities, and state schools, and some are working full time. Most grew up going to church all the time, a few didn’t. They are mostly from the South.

What they have in common, besides being a sexual minority, is that all of them have been wounded by church in some form or fashion. And yet, the vast majority of them are still open – in fact, still seeking – a place to belong within a church family.

The students who came to this retreat grew up in our Sunday school classes. We hosted baby showers for their mothers before they were born. We changed their diapers in our church nurseries and we rocked them in cradle roll classes. We taught them the words to “Jesus Loves Me” and as they grew we took them on mission trips and chaperoned them at lock-ins. They grew up before us, just as though they were our own children.

They were dear to us.

And so were their families.

But as they grew, as they came to realize there was something different about them – about their sexuality – most, if not all, of them who grew up in churches felt ostracized and unwanted. This is especially true for students who take the great risk of opening up to someone at church. I have heard countless stories of middle, high school and college students who, upon sharing their sexual orientation with someone at church, have been removed from leadership roles in children’s ministry or in their youth group or as ministry interns. None of those actively involved and eager to serve students remained at that church after being removed from their previous roles. A few of them found a place of belonging within another faith community, but most just walked away.

Their parents write me and ask, “can my 14 year old son find a place to serve at your church? He loves to sing and he used to sing during the Sunday morning children’s church, but after he went to talk to the youth minister about his feelings for boys and what that meant, he hasn’t been able to. The youth minister asked the children’s minister how to help my son and the children’s minister immediately sent him a text message and told him he would no longer be allowed to serve. Could we come to your church? Would my son be included?”

Is it any wonder, then, that children who have first been loved and nurtured and accepted and put to work in our churches, but then are turned away when they simply come to us and tell us something new about themselves – the very thing we say we want them to do, to be open and honest with us, “you can tell us anything” – only to be isolated and cast out?

Is it any wonder that they walk away, wanting nothing more to do with our churches, our faith, our God?

But Sally, you may be thinking,

we can’t let a gay student be “out”

in the middle of all those other kids –

especially the young ones!

Why, they’ll influence the other kids

to think being gay is okay!

We have to “speak the truth in love!”

“Speaking the truth in love” was never meant to isolate, to abandon, to discourage our children. To so humiliate and embarrass our children that they become fearful to tell us anything about themselves. To push them away with silence and fear such that they simply bide their time in our homes, in our churches, because to tell us this part of themselves means risking everything.

And yet, with all this, many of our LGBTQ+ children are still seeking God. 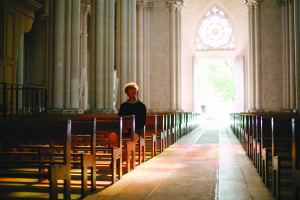 They still want a place to belong, to serve, to use the gifts they’ve been given by God.

They still love to sing.

They still want to believe scripture can be less of a weapon, and more of an encouragement.

They miss the people who nurtured them.

They miss being reminded of whose they are.

Most of all, they’ve missed out on the basic teachings we all need to acquire when we’re young – teachings that equip us to be faithful followers of Jesus. But when you’re focused on keeping a secret for fear of what would happen to you if you told, when you’re using all your energy trying to figure out what all these feelings that seem to be different from everyone else mean, when you’re just holding on by a thread, waiting until it’s safe for you to tell anyone, well, you’re not able to concentrate on what it means to be a disciple of Christ.

For those who see homosexuality as immoral, it seems to be elevated over any other type of sexual immorality, such as rape or sex trafficking or lust or pornography or any heterosexual sin. Why is that? How did we ever come to that, especially given the list above? And why, after all this time, do we still ignore this?

If that’s going to happen, though, we have to do better.

What would happen if we simply embraced these precious ones right where they are? What if we stopped arguing over what we have believed about sexuality with minimal, if any, further study? What if we recognized – indeed, emphasized – all the other parts of what it means to be a disciple, a follower of Christ? What if we held fast to what Jesus felt toward those who discouraged “little ones” – that it would be better for a millstone to be hung around their necks and cast into the sea?

Maybe if there is a time and place to “speak the truth in love,” it would be to those who resort to discouraging our kids because of long held wrongful beliefs about sexuality.

If you’ve experienced that kind of discouragement or exclusion from family, from church, I’m deeply sorry. If you want, I’d be happy to introduce you to people from all over who’d love to help make up for that. Just let us know.

As I told the students at the retreat this past weekend, you have a CenterPeace family waiting to meet you.