Sitting in a movie theatre and watching myself on the big screen this past week was surreal.

I traveled to Austin for the theatrical release of CenterPeace’s latest documentary at the Alamo Drafthouse. 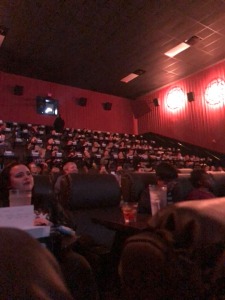 After a while all I could think about was how much I wished I’d gone ahead and bought the Crest whitening system I was too tight to buy. Sheesh, too much coffee and tea in my lifetime!

My favorite part of the whole evening was seeing students from my teaching days who came to watch the film. Students who are all grown up with families and careers, yet they always remember me as if I were still the age I was when I taught them. There’s just nothing sweeter than those reunions.

But perhaps the most important part of the night was hearing questions from the audience during the “talkback” with director, Jordan Bunch, and me after the film. People were interested in how the documentary is going to be used, and what we hope to achieve through creating a film like this.

Here’s what we said:

This documentary is actually the second in a series that we launched in 2018. (Watch the first video on our website.) Our motivation behind this project is the power of story. By sharing people’s stories through the medium of film, we’re able to go far beyond the facts of a person’s life. We enter into their emotions, we experience life events and the impact they’ve had on the person’s life, helping us relate and empathize in ways we couldn’t before. Because we don’t even begin to realize what it’s been like for someone until we sit down and really get to know them. Film and the internet simply give us greater access to listen to each other’s stories. The more stories we hear, the better we understand each other. And the less isolated we feel.

Often people will say to me, speaking of their hometown, or of their church, or circle of acquaintances, “we don’t have anyone ‘like that’ here.”

In the smallest, most rural, most unassuming places. Kids are growing up everywhere who will wrestle with their sexuality in cultures that are still ill-equipped to help our LGBTQ+ children grow up with a healthy picture of self.

So the more stories we can tell through this medium and make available on the internet, the more our kids will understand, and as Jennifer Garner’s character says to her son in the movie, Love, Simon, the more they’ll be able to breathe.

And most of all, our kids won’t feel so alone.

They’ll realize that there are lots of LGBTQ+ people who are committed Christ-followers.

That it doesn’t have to be “one or the other.”

These stories aren’t easy to come by, because it takes courage to put yourself out there to the world. These stories aren’t easy to produce either. They require time and energy traveling to remote locations, to emphasize all the different spaces LGBTQ+ people occupy. Producing a documentary like this takes expertise – from professionals who know what they’re doing – but it also demands a heart for the people whose stories you’re telling. We’ve found all of that and more in Jordan Bunch and his team at Film Mavericks in Austin, TX.

Would you help us in sharing these stories? Here are some ways you can help –

First, help us promote the upcoming theatrical releases in Abilene, TX, November 11 and in Dallas, December 2, by sharing these posters on social media.

Second, attend one of the showings at the Paramount Theatre in Abilene, or the Magnolia Theatre in Dallas, and participate in the Q & A after the film with Jordan and me!

Third, bring the film to your area by booking a theatre and promoting ticket sales to refund your expense!

Finally, consider giving to our GoFundMe Account to help us produce more documentaries. Between the hours upon hours of editing in post-production, to the travel expenses required to film on location, each film costs roughly $15 – $20,000 to produce. Our goal of $50,000 will enable us to make three more films over the next couple of years. Every donation helps, so don’t think small gifts don’t make a difference – they do!

How God will work through the telling of these stories remains to be seen. Truth is, we may never know just exactly how impactful this storytelling venture will be. But we know one thing for sure….

God has always used stories to move us.